American Legion College began at the 1944 National Convention with Resolution No. 138 and was created to help educate and integrate veterans joining the Legion after World War II. The first two Legion College sessions convened at National Headquarters in Indianapolis in July and December 1946 and covered a variety of topics, including Legion Service Work, Youth Programs, Child Welfare, Legion Legislation, Veterans Preference, Community Service Programs, and Legion Public Relations and Speeches. 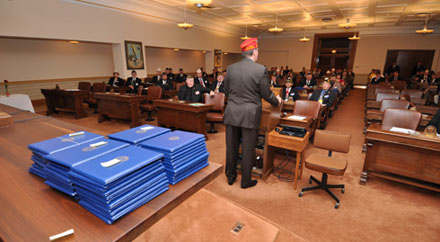 Additional sessions from 1947 to 1949 trained hundreds of future Legion leaders. A session in December 1950 was canceled because enrollment requirements weren’t met, but with the influx of Korean War veterans, two more sessions were conducted in 1954. By 1955, a number of departments were already offering their own Legion Colleges. This became the preferred method for training future leaders due to budgetary considerations and the ability to offer Legion education to more Legionnaires through their departments.

The national-level Legion College was reinstituted based on recommendations from the 1997 21st-Century Ad Hoc Committee report. The first Legion College since 1954 convened in November 1999, with 34 Legionnaires participating. Legion College continues to be an annual event that educates students in leadership, management, and communication.

© 2022 Department of Mississippi | All Rights Reserved